A video has been doing the rounds on the Internet recently, one that depicts a women going into total meltdown when she can’t get her Chicken McNuggets (click here). A warning though, if you do click on the link, whilst the video is hysterical, it’s also shocking and contains more than its fair share of foul language. Although perfect car crash TV (and leaving aside the possibility that the woman in it might be on PCP or crack), it’s also a perfect display of someone with anger management issues.

We live in a stressful world; most of us hold down stressful jobs and are living stressful lives. More and more people are finding it hard to hold in their rage and are at a loss to understand why.

When those rules are broken, we feel under threat. And, when that happens, our hackles naturally begin to rise.

Anger then, is a natural response to being thwarted, frustrated, lied to, attacked, treated badly and so on. So, anger is not the problem. However, it’s how you deal with it that is.

Anger then, can either be in or out of proportion to the to the rule that is broken.

When someone is healthily angry (or just plain frustrated), they do not see themselves as absolutely right (or the other person as absolutely wrong) and can therefore see both sides of an argument. As a result, the healthily angry person is under control and has more choices available to them. They can let it go (realising it’s just not that important), or they can communicate their frustrations more effectively instead of going on the attack. The healthily angry can assert themselves without resorting to foul language, threats or abuse, thereby affecting a more rational solution to the issue.

After all, there is a world of difference between saying: “oh dear, you don’t serve Chicken McNuggets yet? How disappointing, I don’t suppose, kind sir, that there is any leeway on that?” and screaming, “I will kill you, I will rip your face off, do not make me assume my ultimate form!”

I do not know what Nugget Woman’s ultimate form is: fighting robot maybe, mutant lizard possibly, who knows? But, what I do know is that her foul-mouthed tirade did not end well for either party. Anger never does. And anger can rear its ugly head anywhere: at work, in the home, on the street, on tube trains and buses and, clearly, at drive-through counters.

I’ve helped many people with their anger management problems. CBT and hypnotherapy are both excellent tools at helping you change how you react in the face of life’s frustrations. Which is better for you, even better for your health and so much nicer for the staff at a McDonalds.

Tops tips for dealing with anger: 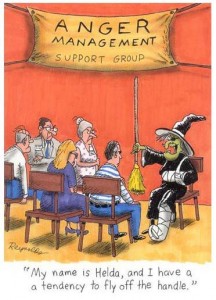 Looking for a Life Coach?
Hypnotherapy: Icebergs and Hidden Depths
Travel in Time with Hypnotherapy
Treating Phobias: Help is at Hand
Think of a Therapist as a Mechanic for your Mind
Stop Smoking: Once A Quitter, Always A Quitter
What does it feel like?
Depression: It’s not Always as Bad as it Sounds