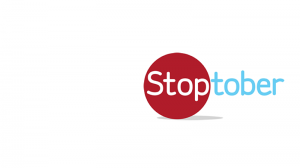 Yes folks, it’s that time of year again. Forget your New Year’s Resolution, that’s so nine months ago. And forget National Smoking Day, that’s so 14 March and you were busy then. Today, the Government launched Stoptober 2014.

Now in its third year and supported by a website (click here), a kit, an app, daily emails and more, it’s even got comedians such as Paddy McGuiness, Al Murray, Lee Nelson and Andi Osho backing the campaign.

Dame Sally Davies, Chief Medical Officer for England, says. “Last year, over a quarter of a million people signed up and 65 per cent of them stayed off smoking for the full 28 days. And, if you stay off for 28 days, you’re five times more likely to stop smoking.

The problem with cigarettes is that they are both a habit and an addiction. The addiction is the easy bit. If you do not smoke for three days, you have broken your addiction to nicotine.

After that, it’s all habit. But, what is a habit?

It’s a piece of programming in your mind, a neural pathway you’ve built in your brain. It takes about three weeks to build a new neural pathway but, once it’s set, by the time 28 days have elapsed, you are pretty much operating to it unconsciously.

To put it another way, if you took a new job in a different part of town then, for about three weeks, you would consciously have to think about how to get there: get off at that station here, turn left at that corner there and so on. However, that new journey is building a new neural pathway in your mind. By then end of the month you’ll have plenty of moments where you remember leaving the house, the next thing you know, you’re arriving at work and how you got there will be a bit of a blank.

Stop smoking for three weeks and you have a new neural pathway in your brain: the I Don’t Smoke Anymore pathway. After 28 days, you won’t even be thinking about how much you don’t smoke.

If you want to stop smoking, if you are sick of the stink, the cost and the health risks, then Stoptober is an excellent time to pick.

I’ve blogged about it before (click here), but hypnotherapy is one of the most effective ways to stop smoking. Not only can it remove the cravings as you deal with you withdrawal from nicotine but it can help build that new neural pathway, so that not smoking for a month seems effortless.

I’ve helped hundreds of people quit and offer two ways to do it (click here): one for the seriously committed and one for those who are sitting on the fence.

As Pub Landlord Al Murray says, “When it comes to stopping smoking the only thing stopping you stopping is the fact that you can’t stop, so stop stopping yourself and stop.”