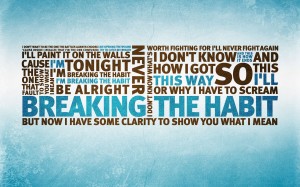 So, here we are, just a few short days into October, a month designated for giving up not one, but two unhealthy habits: namely, drinking and smoking. Yep, MacMillan would like you to go sober for October (click here), while the NHS would like you to use this month to stop smoking for good (click here). But, just how hard are these habits to break?

To understand that, you only need to understand what a habit is. We are what we repeatedly do so, really, we’re a massive collection of habits. We have eating habits and behaviour habits (both of which can become very predictable). Driving is a habit, as is the journey to work, and (addictive elements aside), both drinking and smoking are habitual.

As you do something new, you build a new neural pathway and the more you travel that path, the more solid it becomes.

But, it takes just three weeks for a neural pathway to set.

But, your brain is always changing shape. It’s forever growing and shifting and adapting to your needs. It’s building new neural pathways and creating new habits all the time. This ability is known as neuroplasticity.

Both cognitive behaviour therapy (CBT) and hypnotherapy are excellent tools to help you rewire your brain and build those new habits. So, if you want to stop smoking, if you want to give up drinking, or if you are a few short days into October and are struggling with your goals, then you could find a therapist trained in either one of these techniques or, preferably, both.

As a big hint, if you are reading this, you’ve already found a therapist trained in both disciplines and I’ve helped plenty of people to give up smoking and quit drinking.

In the meantime, if it is Sober October for you, or if it’s Stoptober (or both) and you’re struggling; there are a few things you can to do to help get you back on track.

How to retrain your brain

Both CBT and hypnotherapy are excellent tools to help you break a whole host of bad habits, not just drinking and smoking.