A demand is a dogmatic belief; the rigid expression of a desire for something. It’s also held in the unconscious. You don’t know you’re making it, but this is what REBT teaches us.

For instance, let’s say that I had a tube train phobia and the thing that terrified me the most was getting stuck in a tunnel, then my unconscious demand would be, “I must not get stuck in a tunnel.” And, let’s say that you were always getting in angry arguments with your partner because they didn’t respect you, then behind that anger would be the demand that your partner should respect you.

Demands disturb you because they are unrealistic (trains do get stuck in tunnels and people do disrespect one another, no matter what you demand); they don’t make sense (just because you would like to be respected it doesn’t logically follow that you have to be) and, finally, demands don’t help you. Demanding that you must not get stuck in a tunnel keeps you too anxious to ever get on a tube train while, demanding respect has you arguing with your partner instead of communicating with them.

When disturbed, you may even be holding other unhealthy beliefs about that person, that event, or that situation, but they will be based on that demand.

And if you need help with a problem that you feel stuck with, why not find a CBT therapist that understands all about demands and how to deal with them?

People can disturb themselves by making demands about anything and everything but, Albert Ellis, the psychotherapist who developed REBT said that they all broadly fall into one of three categories; that there are three types of demands that hold us back:

If you’ve made it this far through this article, hopefully you’ll be wondering what the healthy alternative to a demand is.

Well, that’s another blog for another day. 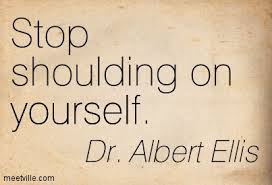 Jealousy: Can you tame the green-eyed monster?
Stop Smoking for October
Treating Phobias: Help is at Hand
Beating the Stigma of Mental Health
Think of a Therapist as a Mechanic for your Mind
You Can Beat the Bullies
Ten Quotes That Sum Up CBT Perfectly
Fear of Flying: It Can Be Controlled