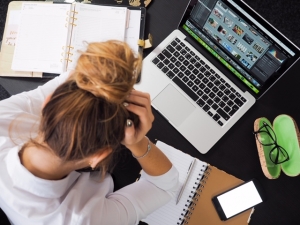 Earlier this month, I talked about stress and how, according to a massive survey last year, three out of every four Brits are feeling overwhelmed or unable to cope. I also mentioned that therapy could help you to regain control. And it can, only not always in the way that you think.  But, what does that mean exactly?

I’ve lost count of the amount of times someone has come to see me and said something along those lines and, when we’ve broken it down, three years ago, they were in a team of 15 and now, they’re in a team of three. People got let go and the work got parcelled out; people left and were never replaced and the work got parcelled out and so slowly, over time, the people that were left ended up doing all the work that everybody else used to do. Not necessarily on purpose, I guess we could say, if we were being kind, more in a thoughtless, “oh, we never realised” kind of way.

When that happens, you don’t need therapy per se; but you do need to have a word with your boss about your workload.

However, if you don’t feel able to have that word, or are too scared of the consequences (either real or imagined) of said conversation then, again, psychotherapy can help you with that.

I once worked in a company where practically everyone was too scared to leave on time. No one, but no one, wanted to be seen to be the first to leave and so, at five thirty on the dot, every evening, everyone stayed exactly where they were and the whole atmosphere at work changed. It got odd and awkward and strained as people with nothing to do shuffled not much of anything around, desperately trying to look like they did have something to do, despite having got all they needed to do done, until the first workhorse bolted that is, and initiated a rather relieved exodus.

When I quizzed someone, quite senior actually, on why people did that, they said, “you know.” Only, I didn’t know.

“What about the boss?” I asked, wondering what on earth it was that they did.

“They’ll give you that look,” they said.

It was genius; an entire office full of staff too scared to go home on time, despite having nothing to do, despite being on top of their respective workloads, and all because the boss would “give them a look.”

Those people just needed a few tools to help you them become more assertive, and to deal with any and all actual consequences of said assertion. [1]

I’ve said it before and I’ll say it again: study after study after study shows that people who go in to work on time, who take regular breaks (including coffee breaks and a full hour for lunch) and who go home on time are not only healthier and happier than their stressed out colleagues but, and here’s the kicker, they are far less likely to take time off work sick to boot. And stress is the number one cause of staff absenteeism.

They can’t tell their boss that the unrealistic deadline is unrealistic and will take seven days, not three; or they can’t say, “I’m not working late tonight” or “I’m going out for lunch.”

These people need the tools that REBT and CBT provide to help them take back control, of not just their deadlines, or working lives, but of their private lives too.

After all, when it comes to that list of regrets that we all tend to hold as we are about to depart this mortal coil, I sincerely doubt that “I regret I didn’t work harder” is on there.

How much more capable would you feel if you handed some of your work back, told people what the deadline really should look like and then went to lunch for a whole blooming hour?

So, with that in mind, isn’t it time you took back a little control, starting today?

[1]I went home on time many, many times. And, do you know what happened? That’s right, nothing. Nothing bad happened

Take the Stress out of Christmas
Am I a Specialist?
Work Stress: It Isn't Getting Any Easier
Work: Are You Buckling Under the Strain?
Work Stress: More Needs to be Done!
Executive Stress: It’s Tough at the Top
Work-Stress: Prevention is Better than Cure
It Gives me the Pip