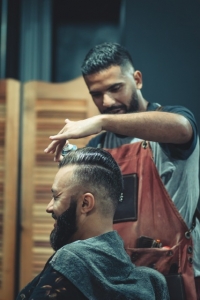 It’s good to talk, isn’t it? Male or female, young or old, it’s good to have someone to turn to in times of trouble, yes? And yet, despite the many inroads made in raising mental health issues, men still struggle with talking about their feelings, or reaching out if they’re in difficulty. Which is problematic to say the least. And, it needs to change, but how?

Enter then, the Lions Barber Collective (click here), an international collection of top barbers who have come together in a charity set up to tackle suicide and depression in men. This is important for two big reasons.

Firstly, according to Sky News more than half the men interviewed in a recent poll said they would prefer to open up to someone like their barber, rather than to their someone like their GP. Secondly, whilst more women attempt suicide than men, more men die by suicide than women. According to The Samaritans, in 2017, 4,382 men committed suicide as opposed to 1,439 women, with middle-aged men in the 45 to 49-year-old age group the most at risk.

The reasons for this are many and complicated but, for a start, men don’t have a support network in the same way that women do and consider talking about their mental health issues a sign of weakness. But, actually the opposite is true. It takes strength to open up. It takes courage to ask for help.

Men are more likely to open up to someone like their barber, not just because it’s a more ‘blokey’ environment, but also because, after a few visits, they will have built a rapport with the man they’re trusting with their bonce and what’s on it.

The Lions Barber Collective have a scheme called “Barber Talk” where volunteers are trained to recognise the signs and symptoms of depression and other mental health issues and can talk, listen and point them in the right direction for help.

Both of these therapies are active-directive (which means that it’s not just you sitting their talking about your feelings, the therapist plays just as active a role in helping you get well); it’s also solution-focussed and goal-directed. So, it’s not just talking, it’s talking with a point, a chat with an endgame in mind. REBT and CBT are both concerned with looking at where you are and where you want to be, and then giving you the tools to help get you there.

Yes, you can have the stereotypical, softly spoken, touch-feely type of therapist in REBT and CBT but, you can also have a structured, no-nonsense, down-to-earth and, even, blokey type of therapist. In short, there is a therapist near you that isn’t a million miles away from your barber in terms of attitude.

International Men’s Mental Health Week 2019 (click here) runs from Monday 10 to Sunday 16 June. This year’s topic is “men’s health by numbers.” Here in the UK on 16 June we have this year’s March for Men (click here), which raises awareness of and money for prostate cancer.